It has been announced that letters can be sent off only twice a month. This is just the same as in [Moscow’s] Butyrka Prison. On 27 February the latest party of prisoners arrived from Butyrka, so the cells are full – before there were seven, now eight people to a sixteen or seventeen square metre cell – that is, two square metres per patient. This is all intentional. There is no room to move. [9a]

One is allowed to go along the corridor, but only if it’s absolutely necessary – to the toilet, to get items of food from the nurse, or to smoke in the toilet. The toilet here is a cess-pit: four holes in the ground and two taps for fifty-four people, very reminiscent of station lavatories in the worst sense of the word. Less than half of all patients work at weaving nets. This is a type of work which is far from dynamic. The exercise period amounts to an hour in tiny exercise yards far smaller than in Butyrka. There isn’t a single locker in the cells, you can only write by squatting beside your bed on the floor. The light is poor. 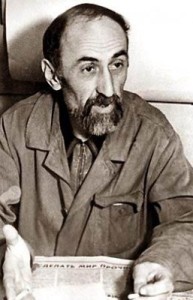 We were warned that pencils and fountain pens would be taken away and that they would only be issued if this was absolutely necessary – to write letters, that is, as in the case of P.G. [Grigorenko]. A smooth routine is gradually being “established” and will be like the routine in Chernyakhovsk, but even harsher, in the best traditions of the Central Prison at Oryol.

What of the medical treatment? [9 b] Any phrase spoken incautiously to a doctor or nurse can serve as a pretext for a series of aminazin [largactil] injections. Sometimes these injections are prescribed without any pretext, simply because of some doctor’s whim. The head of the medical department is an oculist. Another doctor is an ear-nose-and-throat specialist, a third is a physician. As far as I can see the Head of the hospital, Lieutenant-Colonel Baryshnikov, is himself supremely qualified to become a patient in a psychiatric hospital. It is by sheer and absurd chance that he is in charge of the hospital, for before we came, he headed a sanatorium for tubercular patients – in fact, in the very same building. By training this lieutenant-colonel is a surgeon. [9 c]

When our party of prisoners arrived from Butyrka, all sixty of us were prescribed treatment, without undergoing any medical examination. I, for instance, had my blood pressure measured, but the others did not even have this. Almost all of those who arrived were given aminazin, both orally and by injection. No one showed any interest in either a patient’s heart or his liver or anything that was wrong with him, if these had no bearing on psychiatry. Only two of the group, whose obvious allergies to aminazin had been established at the Serbsky Institute, were saved from the injections. One had serious liver trouble – the result of injuries sustained at Butyrka. Because of these injuries, he had had to be operated upon – they took him to the Sklifosovsky Institute.

During rounds, just by way of an experiment, I complained about feeling poorly after a dose of haloperidol, and asked that the dose be reduced. This led to my being prescribed even more aminazin than I was already receiving. The head physician, Yevgeny Vladimirovich Kozich, the oculist I have referred to already, being in charge of my case, made this decision.

During a hunger strike in January (I had been given aminazin ever since my arrival), I felt steadily worse and worse, and after making a complaint, I began to get aminazin injections in the maximum dose, or very close to it (approximately 6 cc). I couldn’t sleep at all, yet the same dose was administered to me for twelve days in a row, until they became convinced that I was still not sleeping, and that the injections had not made me give up my hunger strike. I was given two injections a day, from 7 to 18 January, and from the 19 January onwards I have been given two tablets of haloperidol twice daily, that is four tablets in all (and Kozich assures me that this will go on for a long time). This medicine makes me feel more awful than anything I have experienced before; you no sooner lie down than you want to get up, you no sooner take a step than you’re longing to sit down, and if you sit down, you want to walk again – and there’s nowhere to walk.

By the way, I’m not the only one who’s had this sort of thing happen to him. Everybody here has their life made miserable by triftazin [trifluoperazine/ stelazine], aminazin, and other powerful drugs. The doctor who used to be in charge of my case, Leonid Timofeyevich Petrov (…) said to me, in an attempt to justify the use of aminazin, that the vast number of new arrivals made it difficult to ascertain what was the matter with each one of them, and that because of that errors occurred – in my case, the prescription of aminazin. Just now, during his round, Kozich assured me that everything was being done properly, and there were no doctors who’d wish to harm their patients. “I haven’t met any doctors like that, ” he said, “I’ve only read about them. ” And so once again I am prescribed aminazin. There you have it: the defencelessness of a prisoner in a special hospital, totally at the mercy of a doctor’s whim, constantly in danger of being prescribed some new medicine or injections, whenever the doctor takes exception to some remark or glance of his. What has happened today has convinced me that if one complains that a medicine has an adverse effect, one will earn oneself either an increased dose of the same medicine, or an extra prescription of a new one. This has already happened often.

From 7 to 8.30 pm we are allowed to use the dining-room: we can write letters, or play dominoes and chess. The bedlam is indescribable. Your head feels as if it’s about to burst. The letters you write in this atmosphere are strange…

We only have an hour’s exercise (we had two in Butyrka); the exercise yards are so cramped and crowded that it makes your head swim once more. Today, when Kozich heard my warnings that he would have to answer for the patients being treated in an arbitrary and unceremonious manner, he threatened to put me in a cell with severely disturbed patients; I have already savoured the pleasure of such neighbours, and at some length at that – for more than a month, in fact. This happened just at the time when they were giving me injections in order to make me stop my hunger strike, but they didn’t succeed, although sharing a cell with severely disturbed patients and having injections into the bargain is more than one can put into words (… )

My teeth are firm again, but one is still a little loose – and that’s two months later! If you have any doubts over what brought about this clash, I’ll describe it in greater detail. 17 January was a Sunday. After my injection, I wasn’t allowed to take exercise. The “screw” [warder] got the wind up, not wishing to take the responsibility for anything that might happen to me during my exercise period (my hunger strike was scaring him). Fairly calmly, I demanded the period of exercise due to a prisoner and tried to join those who were being led outside. They grabbed me, twisted my arms behind my back, forced me back into the cell, and in the doorway the exercise “screw” dealt me a blow on the jaw. My gums were rather tender; after all, this was the 42nd day of my hunger strike. Blood gushed forth. Once I had been locked up again, I broke the small pane of glass in the door, shoved my hand through the opening, drew back the bolt, ran out with a piece of glass still sticking in my hand, so as to settle accounts with the Chekist [secret policeman]. But he managed to nip out on to the staircase, and slam the door.

His name is Ivan Ivanovich – I didn’t succeed in learning his surname. He still works in the same job – he hasn’t even been transferred to a different part of the prison! As for the official record of the “tooth” incident it states that this occurred when I, in a fit of insanity, smashed the pane of glass with my head, cutting my mouth and breaking my jaw at the same time (!!! ) A lot of people in the hospital have terrible trouble with their teeth, but they are not taken to the dentist. They’re given pain killers, and advised to take more care in eating.

These overcrowded cells are hypocritically referred to as “little wards” and anyone who calls them “cells” is threatened with punishment. Tender diminutives are coming into fashion; one talks of “a little bit of aminazin”, and so on. There you are: the Yudushka Golovlyov [a character of Saltykov-Shchedrin’s] syndrome. Here we joke about these things: a “baby dungeon”, “teeny-weeny injections”, “a wee bit of excrement for analysis”.

We’ve had a severely disturbed patient, who has nocturnal attacks of epilepsy, put in our cell. The first night he wet his bed and as the mattress was soaked right through the smell lingered for a long time. The only thing they did was to change the sheets (… ).

The story of Victor Prikhodko, who was born in 1936, is also not without interest. This gifted lad, who could reel off Dostoyevsky’s family tree, was a dancer, a singer, and tremendously alive and alert. At one time (in July) in the next cell to me (… ). Before his arrest he had worked as a driver.

In September, he was hauled off to the Butyrka prison hospital, where they gave him massive doses of aminazin injections and something else as well. And so it happened that one day he woke up – but not completely, and thereafter he remained in this half-awake state – his head on one side, his speech languid and indistinct, his eyes glazed. He sank into apathy, and all his reactions slowed down. Only now, since he’s been taken off medicines, has he begun to recover. He was thus cancelled out for five months. All hail to Soviet “special psychiatry”! (… )