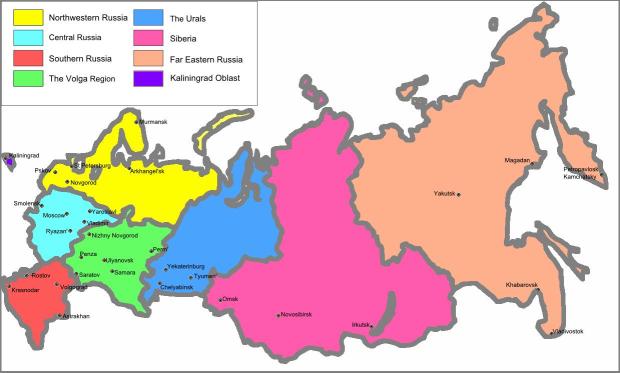 The seven major administrative okrugs or District (since 2010 there have been eight) into which Russia is today divided were used in Soviet times as well to define the principal groups of Regions and Republics into which the army and the police divided the RSFSR.

In the Soviet period the North Caucasus and its seven Autonomous SSRs were included within the South District. Today it constitutes the eighth administrative District (okrug) of Putin’s Russia.

There have been changes in the post-Soviet names of certain capital cities. Frunze (capital of the Kyrgyz SSR) is Bishkek; the capital of Kazakhstan in Soviet times was Almaty.

Independent Ukraine calls its towns and cities by their Ukrainian names: for example, the capital Kyiv (Kiev), and two other major cities, Lviv and Kharkiv (Lvov and Kharkov). See “Letters and Statements”, CCE 22.10, for an early and interesting appraisal of unofficial Ukrainian and Russian attitudes to each other in the Soviet period.

This shows the layout and organisation of the 19 camps of Institution ZhKh-385 (Dubrovlag) in 1969. Until the Perm camps further east came into use for politicals in the early 1970s (see CCE 33.5) most convicted political prisoners were held either in Institution 385 or Vladimir Prison (Central Russia).

In the mid-1970s a detailed description of the Mordovian complex (CCE 33.4) says that political prisoners were then held in camps 1, 3, 17 and 19. The geographical description offered there largely corresponds to the layout shown on this map.

Mordovia forms part of the Volga District (okrug) of the RSFSR and abuts the Gorky Region. The city of Nizhny Novgorod on Map 1 indicates an approximate location for Dubrovlag and Mordovia within Russia.