Workers of all Lands, Unite!

Must be returned within 1 month of receipt
to CPSU Central Committee (General Department, sector 2)

Excerpt from Minute No. 119/11s of the Central Committee Secretariat

Instruct Comrades Pelshe, Demichev, Andropov, Kapitonov and Ponomaryov, with the involvement of the necessary officials, to examine within a month the issues raised by the note from the KGB and present proposals to the CPSU Central Committee.

SECRETARY OF THE CENTRAL COMMITTEE

USSR Committee for State Security [KGB]
at the USSR Council of Ministers
21 December 1970
No. 3461-A
Moscow

To the CPSU Central Committee

Analysis of the so-called “samizdat” literature being distributed among the intelligentsia and the student population shows that “samizdat” has undergone qualitative changes over the past years. Five years ago it was, for the most part, ideologically flawed works of fiction that passed from hand to hand; today, increasingly, documents of a programmatic and political character are being distributed. In the period since 1965 more than four hundred different studies and articles have appeared about the [Soviet] economy, and on political and philosophical issues, in which the historical experience of socialist construction in the Soviet Union is criticised from various aspects, examining the domestic and foreign policy of the CPSU, and putting forward various programmes of opposition activity.

In many documents ideas and views are promoted that have been borrowed from the political platforms of the Yugoslavian leaders, the Czechoslovak Dubchekites and certain Western Communist Parties.

In the article “Certain socio-political trends in our country”, written by R. Medvedev, who is known for his anti-social activities, the conclusion is drawn that new intellectual trends and centres of ideological influence have appeared in Soviet society and in the Party. The article asserts that there are forces within the CPSU that are against the supposedly existing “conservatism” in favour of “a decisive exposure of all the crimes of the period of the Cult of Personality, a purging of the State apparatus from bureaucrats, degenerates, dogmatists and careerists, and a widening of freedom of speech, assembly and discussion, the replacement of censorship by more flexible forms of Party management of the press, a widening of workers’ self-management, a change in the system of elections” and so on. 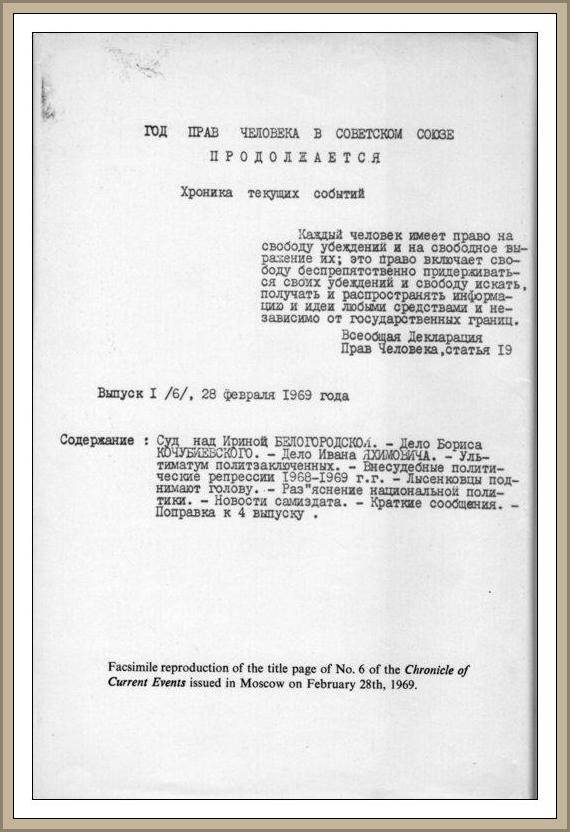 Documents advocating various theories of “democratic socialism” are circulating among the scientific and technical intelligentsia and part of the creative intelligentsia. According to the framework of one of those theories, the author of which is Academician Sakharov, the evolutionary path of the USSR’s internal development must inevitably lead to the creation within the country of a “genuinely democratic system”. In view of this, mathematicians and economists must develop this model beforehand so that it will be a synthesis of what is positive in currently existing socio-political systems.

A number of projects for the “democratisation” of the USSR envisage that the “monopoly power of the CPSU will be limited or removed and an opposition that is loyal to socialism will be created in the country”. Their authors and disseminators, believing that the present level of development in socialist democracy gives oppositionist views the right to exist, demand that legal opportunities be provided for expressing disagreement with official policies. On these grounds they declare unconstitutional the criminal legislation which punishes anti-Soviet agitation and propaganda [Article 70] or the distribution of knowingly untrue fabrications that denigrate the Soviet system [Article 190-1].

A definite consolidation of like-minded individuals is taking placing around the preparation and distribution of “samizdat” literature, and attempts to create the semblance of an opposition can clearly be traced.

In late 1968, early 1969, approximately, a political nucleus calling itself the “democratic movement” took shape among opposition-minded elements. In their own assessment, this movement possesses three features of opposition: “[1] it has leaders and activists and depends on a considerable number of sympathisers; [2] it does not adopt precisely defined forms of organisation but sets itself certain goals and chooses definite tactics; and [3] it strives to achieve legality.”

The main tasks of the “movement”, as they are formulated in issue No 13 of the Chronicle of Current Events (issued by the Moscow group of the “democratic movement” headed by Yakir) include [1] “democratisation of the country through developing in people democratic and scientific convictions, resistance to Stalinism, self-defence against repression, battling against extremism of any persuasion” [CCE 13.9, item 1].

The distribution centres for these uncensored materials remain Moscow, Leningrad, Kiev, Gorky, Novosibirsk and Kharkov. In these and other cities roughly 300 people have been identified, calling themselves ‘anti-Stalinists’, ‘fighters for democratic rights’, ‘participants in the democratic movement’, who produce both individual documents and collections of texts, The Chronicle of Current Events, the Ukraine Herald, Social Issues, and so on. In 1970 a group of Zionist-minded elements in Moscow, Leningrad and Riga began to issue a magazine called Exodus [CCE 14.12, item 6].

Western propaganda, foreign centres and organizations hostile to the Soviet Union, look on “samizdat” as an important factor in the political situation within the USSR. Illegally issued journals and collections of articles are referred to as the press of the “democratic underground”, “the free democratic press”, and so on. On the basis of a comparison of the issues of the Chronicle of Current Events note has been made of the “growing number of participants in the movement” and the presence within it of “constant and collective cooperation”. “Sovietologists” draw the conclusion that a “movement for civil rights” exists and is growing in the USSR, which will gain “more defined contours and a definite political programme”.

Imperialist intelligence operations and the anti-Soviet émigré organisations linked to them do not only take account of these oppositionist aspirations but also try to support them, resorting to the preparation and promotion of forged documents. A number of such documents (for example, the “Programme of the democratic movement of the Soviet Union” [see CCE 17.13, item 7], “Tactical fundamentals”, “No time to lose” [Zorin & Alexeyev, Leningrad, 1969]) contain formulated directions and recommendations for the organisation of underground struggle against the CPSU.

The Committee for State Security is taking the necessary measures to forestall attempts by particular individuals to use “samizdat” to spread slanders against the Soviet State and social system. They are charged with criminal offences under the existing legislation and prophylactic measures are taken with respect to individuals who have come under their influence.

At the same time, noting the ideological transformation of “samizdat” into a form of expression for oppositionist attitudes and views, and the striving of imperialist reaction to use “samizdat” literature for goals hostile to the Soviet Union, it would seem expedient to instruct the ideological apparatus to study the problem and devise the necessary ideological and political measures to neutralise and expose the anti-social tendencies represented in “samizdat” literature, and also to make suggestions as to the factors that facilitate the appearance and distribution of “samizdat materials“.

CHAIRMAN OF THE COMMITTEE FOR STATE SECURITY
[signature] ANDROPOV

[1] Andropov was quoting selectively from the April 1970 Issue 13 of the Chronicle (CCE 13.9, item 4) while disguising and distorting the anonymous source of these words.